I am the proud owner of an Apple IIgs, that was gifted, for a few years now and played a lot with it. But as I don’t currently have a RGB monitor for it, I always used the composite output to get the video display, and I always complained about the fact that this fancy stuff only want to display in monochrome, or maybe in NTSC. I’ve searched for information about that for some times now and never found anything intereseting, and lots of people (including apple?) says that the composite output is monochrome, at least in PAL regions.

I’ve just found the schematics of the IIgs and was looking how the VGC is connected (Yes, my gifted IIgs is not only a ROM00, but also have the buggy VGC*) and my eyes got spotted by a component between the VGC and the composite output, component numbered UC2 with a MC1377 as ref. 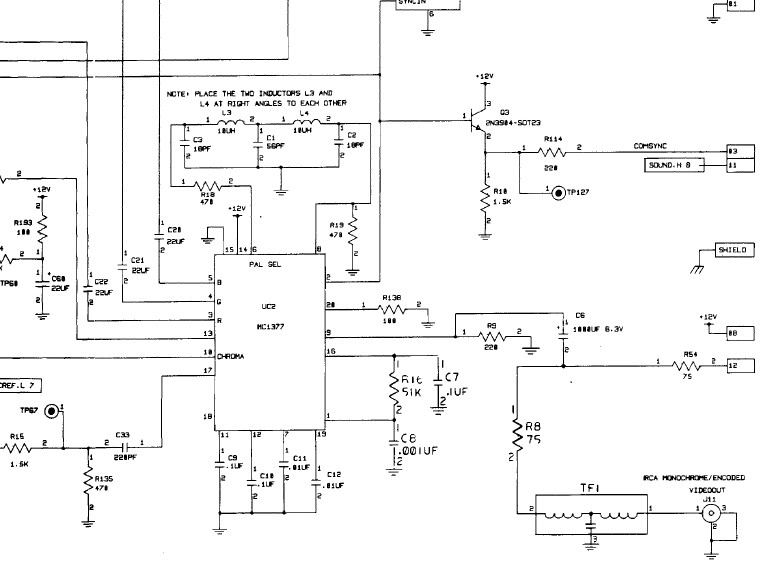 No idea at that moment of what that could be but but as it is between the RGB output and the composite output, it should be a RGB to composite encoder. And after googling yes it is!

It a Motorola 1377 “Color Television RGB to PAL/NTSC Encoder”..

Wait.. What just I say.. Color? PAL? Hu? Why so does my stupid IIgs does not display in PAL and Color?

There is clearly a pin on this chip dedicated to select between NTSC and PAL mode and this pin is on the schematics tied to ground using the 100 ohm R138. Don’t get fooled by that schematic, I don’t know if it from the original or not but “PAL SEL” is not pin 6 but pin 20. And when you read the MC1377 datasheet, you’ll see that pin 20 need to be tied to ground (Motorola didn’t even put a 100 ohm resistor) for NTSC output mode, or floating for PAL mode.

Unfortunately I don’t have my IIgs with me right now so I can’t check if R138 is mounted or not and test without for what happen, but it’s really cheap from Apple to not have put a switch there to be able to select the output mode if it work as expected 🙁

I won’t be able to have it quite soon so if any one can test this before me, I would like to hear about the result, or else, I when I will be able to test, I will add a new blog entry about that 🙂