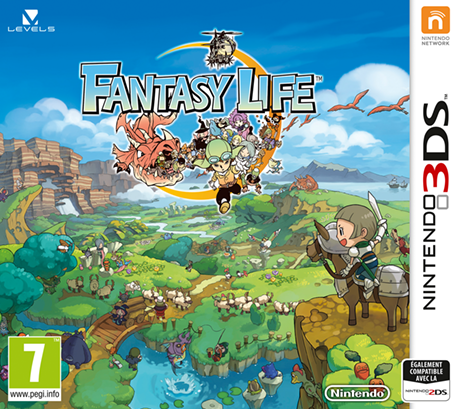 The title of this post may seems a bit overwhelm, as I will not directly speak about the game, but about something this game is currently hiding.

For those who aren’t aware, Fantasy Life is the latest RPG from Level 5 release to the Western World. Level 5 are known for their work on their work on the Dragon Quest games, the Professor Layton games and a lot of other games on Nintendo systems.

But like I said, the problem is not the game itself or its gameplay, not who made it, but a deep problem about how the Nintendo 3DS is working, and Fantasy Life is maybe not the first game to do this (but I suspect this is fairly new), but will, I’m sure will not be the last.

But what is the problem?

Fantasy Life store ALL of its save data on the SD card. Not a big deal when saying it this way, but it provoke a real problem.

Yes, whatever if you are buy the eShop version or the physical version you will need a SD card to save your game.
You may tell me that there are already game that use the SD card to store stuff, like DLC, but here the problem is different.

Let’s say you have multiple Nintendo 3DS consoles (at least two). When you buy a physical game, it will store it’s saves in the cart itself, and you will be able to play on any systems you own. With Fantasy Life you can’t.

You may tell me “Swap the SD card” the answer is No, you can’t it won’t work, you CANNOT start this game on one console, and continue it on another.

Yes that’s basically the same thing, The cart version of Fantasy Life will create and manage its save files the same way an eShop title will do, but the main difference is that it NOT an eShop game as it is a CART game! And when you buy an eShop game you know that it is tight to a specific console and account, and you can’t use it on multiple consoles, but in this case, yes you can play, but you will loose everything if your console crash, destroyed, chewed by your dog, or just formatted, you can say a nice goodbye to your save. (Ok it’s the same for eShop game and save, but again when you buy them on the eShop you are aware of this.)

As for eShop title, the only way to transfer it is to use the transfer tool, but you can only use it once every 7 days, and it’s a slow process as it will copy everything from the source console to the destination, destroying everything on the destination.

The worst situation (which is mine) is that if you have started to play on you non main console, and in this case you are just completely screw as you can’t erase you main one for just one save as you will loose all of your data, and transferring from your main to the other one will just destroy the capability to use the save.You are just screw forever without the ability to do anything.

I will not says that Level 5 choice to store the save on the SD card is a bad idea, they may have lots of legitimate reason to store there (like the need to store lots and lots of data) I don’t know why they choose this, but in the way the save are stored is just the terrible way to do, in fact, I think this situation is just the most annoying they can get. A physical game that you can use on every console you want as usual, but the save games can’t be transferred between consoles like a normal cart does. At least with eShop game, you know this limitation, and you buy it with you main console.

More on the technical problem

You can pass this paragraph if you are not interested in the technical part, i.e. how the data are stored.

[Ok this paragraph is currently empty as I need to rewrite it correctly, but wanted to release the main information, check back later]

Again, this is NOT a rant against the game itself, which is actually a pretty good game for all the RPG fans with tons of interesting ideas.

This is not a rant about DRM to protect game you buy on the eShop, but only against the situation where you have a physical version of the game that share most of the same limitation than an eShop version have, which is not tolerable.

So Nintendo, you shouldn’t let something like this happen anymore and you should provide a way to address this problem. This is clearly a bad idea, and it will break faith in your product, mine have been strongly shaken…