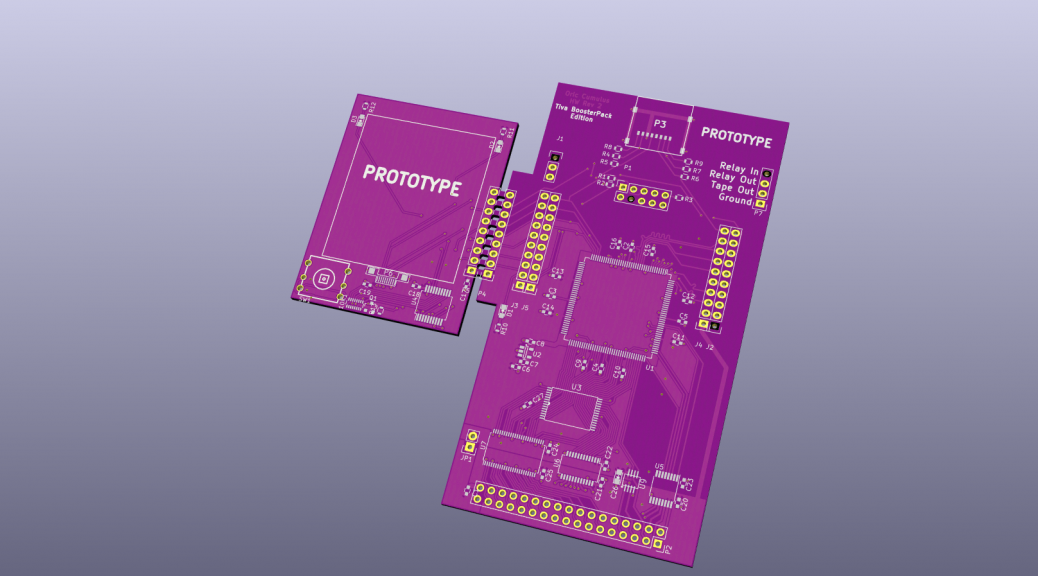 I didn’t updated here really often during the last month because I was quite busy and didn’t had a lot of time to works on my projects. I have more time now, and wow, I’ve made a lot of things recently!

As I previously posted, the Oric Mouse project is underway, I’ve discovered a few stupid mistakes and I was too confident when I made the PCB, I’ve overlooked something on the voltage that the 6502 and 6522 will accept as logic high, and of course both of them doesn’t like the 3.3V that I send them as a logic high… The result will be that I need to do some changes on the schematics for that project, but no worries, I will still be able to use the prototype I’ve made, but it’s just slowing down the project a bit, but it will be back on track quickly.

Now let go to the Cumulus

On last week, I’ve resumed to work on the Cumulus Revision 2.

I haven’t posted here about that project before, but for those who don’t know about the Cumulus, it is a SD based floppy emulator for the Oric 1/Atmos computer that was designed by Retromaster, and for various reason he wasn’t able to continue working on that project and released it as a GPL project.

Metadata eventually disappeared, leaving the project alone again. I then took the project to try to find a solution for the original Cumulus, but after a few try to fix the issue, it became evident that it would be preferable to restart the design from scratch than fixing it: hence the Cumulus Revision 2.

Some part of it are based on my idea for the StartoCumulus project, as the Cumulus Revision 2 will include much more functionality than the original one, starting by supporting the Jasmin drive, thing which would never be possible on the original, because it would need to update the CPLD and there is no easy way to do it in the field. And as the Cumulus Rev2 is able to update the CPLD during a firmware upgrade, all CPLD and uC bugs will be able to be fixed if any are found (and I’m sure some will be found :)) but it will also add the opportunity to add functionality after the device will be release just by updating the firmware.

As there are still a lot of people waiting for a Cumulus, I may release the device as soon as the basic functionality are working, and then continue to work on adding functionality. I suspect that the Jasmin emulation will be present form Day 1, but I can’t promise.

The CPLD is also much bigger (contain more logic) than the one on the original version, and the micro-controller is also a beefier one, we come from a old (an really bugged) PIC18F46K20 to a much more powerful Cortex M4 based micro-controller (a 80Mhz TI Tiva, yeah it’s clock is 80 time of the Oric’s 6502 one :D)

So here is the current layout of the prototype version: 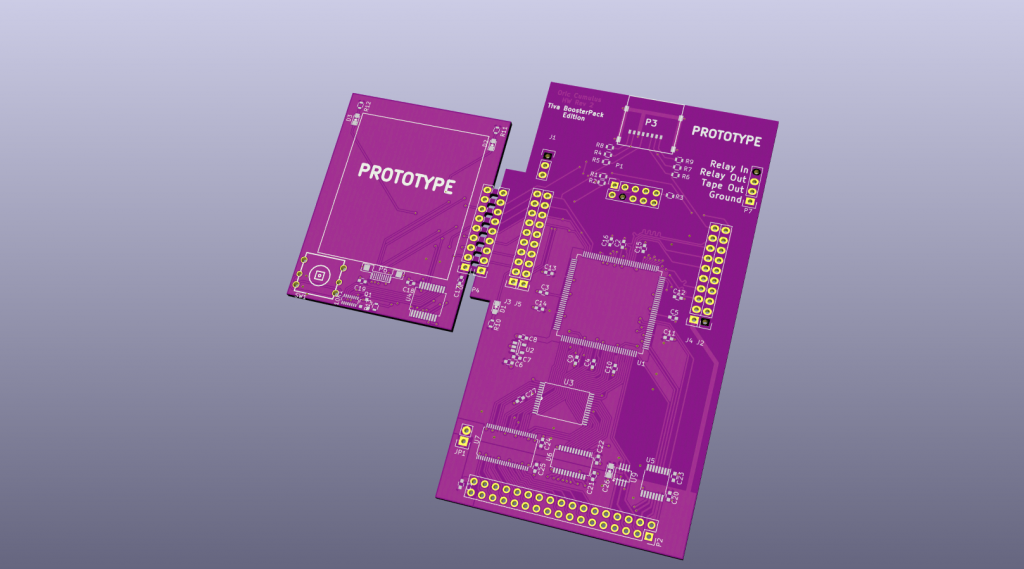 This is not the design for the final version, as I’m using for the prototype an existing board for the Tiva chip (the TI’s Tiva LaunchPad) as it allow me to not bother will all the technical details around the chip, mainly for programming and debugging it as all of it is already included on the development board.

So this PCB is bigger than what we will have on the final version. You may also see that strange design of the PCB, why it’s not rectangular as a “normal” PCB is?

There is a good and thrilling answer for that. As for the OricMouse, the Cumulus Rev2 is build to be as close as possible of the Oric, and to be plugged perpendicularly to the Oric, and that putting a usability issue as the Cumulus need to be operated from it’s screen and button to configure it and mount floppy. It’s a possibility to add such basic thing later on the Cumulus Rev2, but the main use will still be using the screen and button on the Cumulus, and as being behind of the Oric, and directly connected, I found it to be a real usability issue and had an idea to make it better.

What is nice with the current Cumulus, even is the ribbon does not help is it’s some sort of remote shaped, you can move it around the Oric, and then my idea was to keep all the important electronic as close to the Oric as possible, and then make a remote that will provide all the interface between the cumulus and the user, so the strange cut on the left part of the PCB is just what is going to be the remote. The design is not final, but as was originally planning to use a 5 button layout close to the current cumulus, and moved to a 4 direction + click joystick, I think the usability will be much better using that.

The screen will be also about the same size of the current cumulus, and same resolution, but quality will be much higher.

And you know what is the best about all of that?

First the design of the remote could be changed without impacting the main PCB, so better remove could be done after the cumulus rev2 is out.

But the best is that the price of the Cumulus Rev2 will be about the same as the original one! I use better and more powerful part, but they are cheaper, Isn’t life nice? But cheaper price does not mean that the quality will be cheaper! I aim for better quality than what we’ve got currently!

Yes there are more nice news around that project!

One problem I had and discovered when I made the first prototype pcb for the OricMouse is that I’ve overlooked some dimensions of the Oric case, and the OricMouse (and cumulus) would not be able to fit directly behind the computer without a small adaptation board, so I’ve started to design a small PCB that will be connected between the Cumulus (or the OricMouse) and the Oric to keep it away enough to fit.

Here is basically the board: 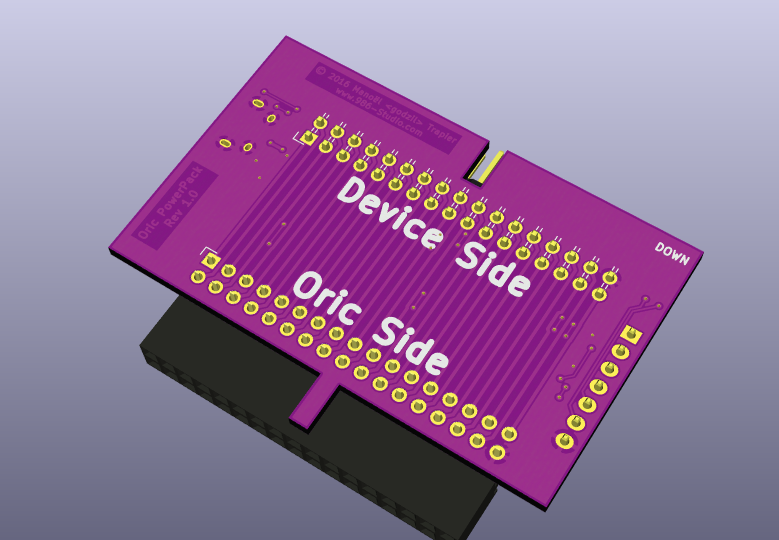 As you can see this board will solve one big issue with the Oric, the fact that we can easily put the connector in the wrong direction or shifted by one or two pin, which is a big issue.

And some of you will tell me, but “what are these connectors I see on the left and right side of the board???”, the answer is simple when I made that board I was a bit bored that it will only do a simple link between the two connector just to add some height between the Oric and the Cumulus, and I’ve added a bunch of components on the other side: 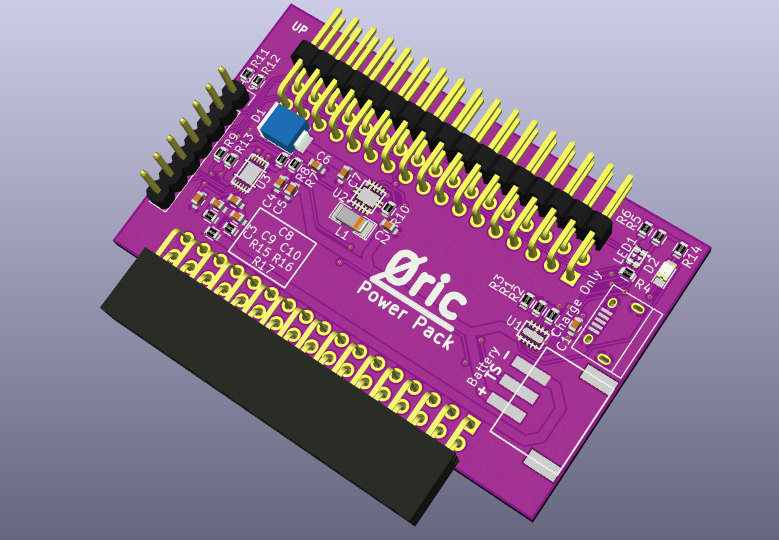 Can you guess what it is for?

Oric PowerPack seems an interesting name isn’t it? I suspect some of you already guessed what this board will do: Providing the ability to power the Oric from a Li-Ion/LiPo battery! Yes!

And is also include the battery charger using a standard micro USB plug, and the Cumulus will be able to get information about the battery. The battery I selected for this device should allow to power the Oric for about 5 to 6 hours which I find absolutely great!

As the components on this board are not cheap (and I still don’t know if I will be able to sell the battery at the same time as the board, because of some crappy rules about sending battery by postal services) there will be two version proposed, one without all the electronics components that will be proposed for free with an OricMouse or a Cumulus, and the PowerPack one which will not be free.

I will also propose this board alone (for about the same price).

Why both are optional? Simple because if you have an OricMouse and a Cumulus, you will only need one, so if some people doesn’t want to waste space with unused board, I will provide the opportunity to only get one.

Some words of caution about this board:

One little things, it would may be possible using a powerful enough USB charger to power the Oric from it. It has to be tested though.

I’ve heard people saying “but why not charge the battery from the Oric 5V and not a USB charger so that I plug the DC jack and the battery will charge”.